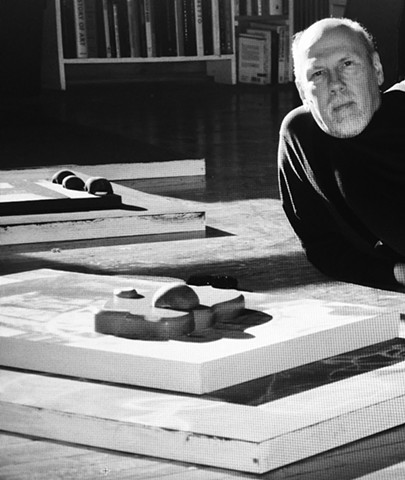 Since the early nineteen-eighties I have been constructing mixed-media wall reliefs that combine sculptural shapes with collage elements, inscribed blackboards and even mirrors.

These sculptural shapes are inspired by biology and machinery, as well as partially-disassembled toys. They are abstract, but they allude to things in this world and can even resemble faces or bodies. Sometimes, they appear to have pieces missing, indicated by a hole or a peg where something might have been attached.

I have always been interested in and inspired by orphaned fragments of other things that nevertheless hold together visually. These pieces appear to be partial and complete at the same time, giving them a kind of pathos, aesthetically pleasing in spite of or even because they are worn or damaged. Like people, they have age and character, altered and scarred by their accumulated histories.

Drawing and writing have always been an important part of my working process. My reliefs are based on sketchbook drawings, stream-of-consciousness doodles that I produce daily. I select the most interesting and unusual of them to enlarge and refine, often trying out different versions or variations. The finished drawing becomes a stencil from which I cut out and laminate the sculpture. As I draw, I also write down descriptive words and random thoughts. These words and phrases become tentative titles. I will often try to break them down into as many similar sounding combinations of words that I can think of, homonyms that are puns but which sometimes reveal hidden, poetic meanings. There is something pun-like in the shapes I draw also. They are abstract and yet they combine elements of real and observed objects that meld together.

Just as my drawing and writing processes contain an element of play, the reliefs allude to toys, games and puzzles. I am interested in evoking memories of childhood but not as mere nostalgia. My intention is to use the worldview of a child as a symbol for the helplessness we often feel as adults in the face of the terrors and absurdities of the world: historical, political and biological forces that are beyond our control.